Episode 38: How to light Up the Path to Chiropractic

I’m going to show you a background of a castle behind me right on the port. It has been a great day here in Naples. I’ve been showing you where I’ve been travelling to as we travel and cruise along the Mediterranean Sea. Today I went to Pompeii with my family. Pompeii is a city that was buried by a volcano called Mt. Vesuvius. I studied Pompeii and had real big showing of interest in Pompeii since I was a teenager when I studied Latin for 4 years in high school. Yes, the dead language. Maybe you’re wondering why I studied Latin of all languages. I studied Latin because I wanted to go to the health field since I was little kid so I wanted to become a doctor of some sort. I figured Latin would help with my anatomy and it did in a way so having taken anatomy in Chiropractic College and also in Kinesiology when I was in the University of Waterloo. But one of the key things that I have learned in studying Latin was studying the works of Pompeii and actually understanding about Pompeii and what happened there and translating each of those word by word in Latin to English. Those were the years in the high school. But Pompeii was really interesting because Mt. Vesuvius erupted in 79AD and basically covered the entire city of volcanic ash basically 20 meters high and this was just amazing and it covered the entire city basically also preserving the entire city as well.

What’s really amazing though is the structure that was kept and how smart they were in terms of the construction and the architecture. I’ll just name you a couple there is the architecture of regards to the way they designed their buildings almost in a diamond shape. And the diamond shape was stacked on top each other because it felt that in an earthquake situation it would preserve the architecture much strongly and second thing that was really amazing also on the road. The roads had bits of marble and the bits of marble were really interesting. As you were looking at the bits of marble the marble itself actually can light up from the moonlight and shine and create almost a light reflecting back up the moonlight so you could actually see where you are going in the middle of the night which is amazing! Right?

So I was just thinking about the way how this applies to practice. Well, my thought process on this was that in practice, what we often do as chiropractors is that we focus a lot on trying to create the chiropractic message — the big idea right from the beginning right from the report of findings. Then, we tell them the whole message on what I call the ‘fire hose approach’.  We basically dump them everything that we know about chiropractic into them in a short period of time.

But I think what’s really important is that you don’t do that.Wwe all know that it’s not great but we do it all the time and most chiropractors try to do that. And I say you give them what I call “60 second tic” which is basically 60 seconds of information about chiropractic, just the highlight on what we do. Then demonstrate it through your examination process. But more importantly though, it’s like those marble specs along the road that you have got to light up the path for them over time and how you do that?

It’s about highlighting those little paths and highlighting the path all the way to wellness. That’s how you will translate someone to a lifetime wellness care client. That’s the goal. It’s to try to actually get them to understand the value of chiropractic and how it actually applies to them as a lifestyle and not as a treatment. A lifestyle approach really focuses on how to create a plan for them no different than exercise & eating well.

There are diets right? But the problem with diet is its short termed its short lived.  Whereas a lifestyle wellness type of plan or a wellness diet is about eating well for life, and exercising wilfully if you want to stay well so  that’s the trick.  So like the marbles on the road on Pompeii, it’s about lightening up the path little bit at a time. It doesn’t have to be big. Small chunks of information through their adjustment process and guiding them through understanding our chiropractic and the wellness care model are enough. 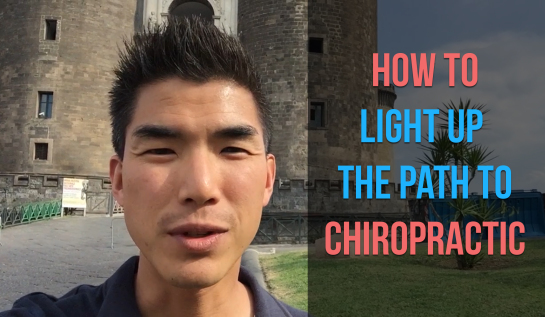