Episode 39: Are You A Picasso or Van Gogh?

It’s pretty exciting here! Just a day before my Practice Like A Pro Intensive in Europe and I thought I ought to share with you a couple of things. Now, you could see the famous trams in Amsterdam right behind me.

One of the key things is that you need to understand is that I just came from Barcelona. Barcelona, obviously, is famous for Picasso and Amsterdam is famous for Van Gogh. Both Picasso and Van Gogh were successful artists in a sense as they actually sold a lot of art that was worth a lot of money.

They are considered to be two of the top artists in terms of the most expensive art that has s ever been bought in regards to auction in the world. But they lived a very different life and let me explain to you what I mean.

They lived a very different life in a sense that Van Gogh really was very poor and he died penniless. Unfortunately his art and his genius were not recognized until he actually passed on. Picasso was actually famous while he was alive and he was very rich because of the art that he was able to sell during his lifetime whereas Van Gogh, art was not appreciated until after his death.

The point is this that the difference between Picasso and Van Gogh, the two most prolific artists in the world, Van Gogh died penniless and that’s not really necessary because even though you are a genius, even though you have places where geniuses actually start to affect you, you can still really make an impact. But if no one recognizes it, then you’re not going to get paid for it and unfortunately there is no relevancy.

What does it have to do with chiropractic?

Well here is what it has to do with chiropractic. So, you might be the smartest and the best chiropractor, or the most skilled in terms of what you do, but if no one knows about you and about what you have to offer, then pretty much no one can actually benefit from the things that you actually are able to provide for them. So, I think it’s really important that you recognize that not only do you need to have the skills,  the resources, and that you’re great at what you do, but you also have to have the people who actually desire what you want and Picasso is a clear example of what that is.

So I think it’s really important for you to recognize that when you have genius, it’s important to actually hang around or focus on the people who actually want your services. If there’s no one who wants your services, then your genius is actually lost.

I hope you learned a lot the difference between Picasso and Van Gogh. Picasso like I said had a network of people who wanted his art that’s something that’s really important. 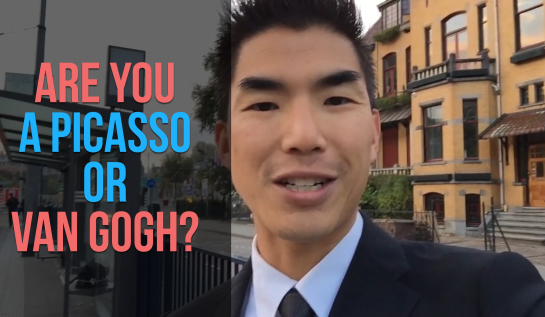