Episode 44: Driving the chiropractic message home to the 90%

I’m here stuck in traffic going from Manly back to my place. And I just thought I’d do a quick video. I’ve never done that video on the road but why not right? One of the key things I notice while I’m driving around Sydney is the difference between Sydney and Perth. That there’s a lot more traffic here but also just because of the way the roads are built and it reminded me about chiropractic really.

I know it’s kind of interesting and here’s why it reminds me of chiropractic. One: that the messages that we try to convey to people or the lives that people are trying to live in this day and age is that it’s like Sydney traffic. It’s like their minds got so much information that they have to process in order for them to live their life. They got their iPhone, they got their Facebook messages, they got their work, and they got so many things that they got to deal with and so many signals.

Now, does that mean that we have to dumb it down? Well maybe it does. Maybe it doesn’t. But the point to understand is that the communication and the message in a world that is already complicated  is not to make it more complicated . It is to simplify the message. The second thing I want to get across with is that we have so many chiropractors thinking that were competing against each other. We’re thinking that we must do better and be unique. Well the message is the uniqueness. Your message is going to be unique to you because you’re the one who’s saying it. You’re going to be different than the person next to you and I think that’s really important to know that chiropractic itself is unique. But you delivering that message is going to be unique to the chiropractor next to you. And stop worrying about the competitor or competition or the chiropractor down the road because at the end of the day, does it really matter?

Stop worrying about trying to chase other people’s patients or clients. Start worrying about the 90 percent who don’t even know that chiropractic exists. And create and craft a message or a communication style that is unique to you but also that’s unique for them to hear, so that they actually want to want your services. That’s just my thing. Just a little bit of random chiropractic messaging.

Simplify the message and make sure you go after the 90 percent of people who don’t even utilize chiropractic and stop worrying in trying to compete for the ten percent. 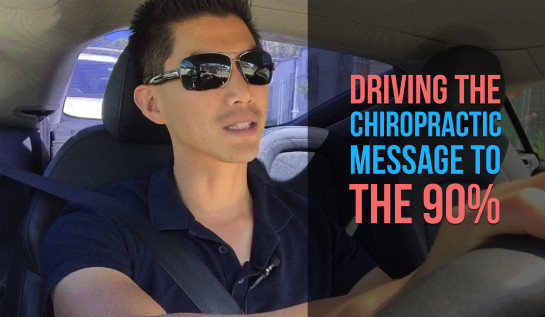